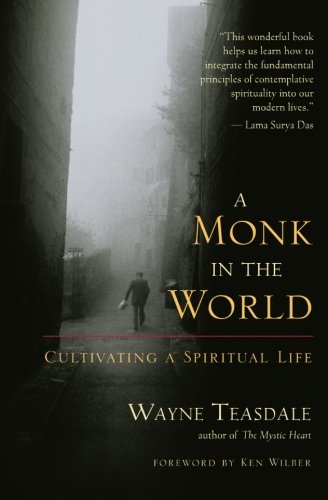 Brand : Wayne Teasdale
from USA
to Japan
in 5-8 days
At your doorstep by Jul 30  to Aug 02 with standard delivery

When Brother Wayne Teasdale took the naked plunge into the sacred Kavery River of India and renounced his possessions and former identity to become a Catholic monk, he expected to remain in the nirvanic atmosphere of the Shantivanam monastery. But hours later his teacher turned to him and said that his mission was not to remain in retreat, but rather to go home to America. "Without a doubt there is great value in spirituality that emphasizes and supports withdrawal from society," writes Teasdale. "But in our time, we require a spirituality of intense involvement and radical engagement with the world." By this he means taking on daily tasks, such as "earning a living, paying bills, saving money, getting along with others, being entertained, enjoying a healthy recreation, and learning how to interact with difficult people." At the same time, the monk must not succumb to "greed, indifference, insensitivity, noise, confusion, pettiness, unease, tension, irreverence." Of course, readers quickly catch on that he's describing the collective mission of humankind. A Monk in the World is the book that contemporary seekers yearn for--solid advice on how to live with spiritual values in a modern world. Teasdale covers the nuts and bolts: how to introduce periods of silence and solitude into daily life, cultivate spiritual friendships, create a spiritual workplace, and how to understand and respond to the world's suffering. Such guidance shows Teasdale at his best, a man committed to building a global "interspiritual" movement--where we all become monks in the world, collectively doing the right thing while honoring the many and diverse paths to God. --Gail Hudson
Show More
Reviews

A Monk in the World: Cultivating a Spiritual Life

Disclaimer: The price shown above includes all applicable taxes and fees. The information provided above is for reference purposes only. Products may go out of stock and delivery estimates may change at any time. Desertcart does not validate any claims made in the product descriptions above. For additional information, please contact the manufacturer or desertcart customer service. While desertcart makes reasonable efforts to only show products available in your country, some items may be cancelled if they are prohibited for import in Japan. For more details, please visit our Support Page.